West Colfax is bordered by Sheridan Boulevard on the west, Federal Boulevard on the east, 19th Avenue and Sloan's Lake on the north, and the Lakewood Gulch on the south. Our neighborhood has a rich and diverse history plus many modern amenities. From the hustle and bustle of West Colfax Avenue to the tranquility of a sunset at Sloan's Lake Park, the neighborhood has something for everyone. We hope you find something of interest on our site and hope to see you soon. 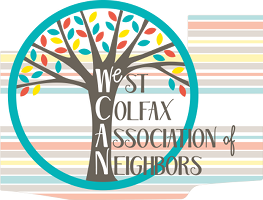 Looking for something to do? Maybe you just want to know when trash pickup is? Check out our events calendar for more.

Want to become a WeCAN member? Maybe you just want to receive our newsletter? Join now! It's free!

As part of our sustainability efforts, WeCAN has moved to all electronic newsletters. View our newsletter archive to catch up.